LUSTER﻿: Realism and Hyperrealism in Contemporary ﻿Automobile and Motorcycle Painting

Throughout the 20th and 21st centuries, cars and motorcycles have not only been ubiquitous on the nation's streets and highways but also in film, top forty hits, and in art. With the emergence of photo-realism in the 1960s, motor vehicles assumed a special place of distinction as subject matter in the iconography of American art.

“LUSTER: Realism and Hyperrealism in Contemporary Automobile and Motorcycle Painting” is a traveling museum exhibition comprised of over 55 paintings by nearly 15 of today's realists and hyperrealists who specialize in automobiles and motorcycles as their primary subject of choice.

“LUSTER” encompasses a broad range of cars and motorcycles, from vintage vehicles from the 1940s and before to more recent classics. During the post-World War II boom years, cheap gas and the advent of the Interstate Highway System in 1956 propelled automotive design and sales. In the 1950s, the industry reached new heights by offering consumers increased horsepower for thrust and speed and, more artfully, integrated design, which was dramatized in the 1960s with features such as tail fins. LUSTER features paintings of passenger automobiles from those boom years and since, plus a range of motorcycles and racing vehicles.

Like the shiny automobiles and motorcycles portrayed by the exhibit's artists, its paintings can be characterized by the luster that permeates their imagery. Chrome ornamentation and trim together with enameled bodywork, glass, and interior fabrication to meet the needs of purpose-built vehicles of all sorts: these are the surfaces that recent realists and hyperrealists have exploited to generate masterpieces.

Serving as curator for “LUSTER” Realism and Hyperrealism in Contemporary Automobile and Motorcycle Painting” is David J. Wagner, who earned his Ph.D. in American Studies and served as a museum director for 20 years.

Museum members will have the opportunity to preview “LUSTER” on January 21 from 5 – 6:30 pm before the exhibition opens to the public on January 22 at 9:30 am. The exhibit is included with admission and will be on display through May 1, 2022. 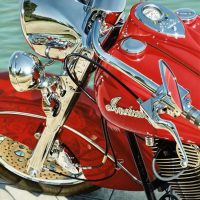 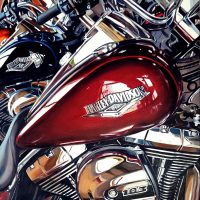 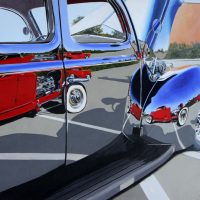 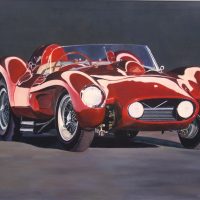