Big Mike is a bronze statue replica of MOR 555, a Tyrannosaurus rex, discovered in 1988 by Kathy Wankel, and greets you upon arrival.

In 1988, Kathy Wankel discovered a portion of a T. rex's arm near Montana's Fort Peck Reservoir on lands administered by the United States Army Corps of Engineers. The arm belonged to one of the most complete T. rex skeletons ever discovered. A Museum of the Rockies field crew worked to excavate the Wankel T. rex from 1989 – 1990 and eventually put it on display in the museum.

Using a mold created directly from the bones, the skeleton was cast in bronze by Research Casting International of Ontario Canada in 2001, becoming the first life-size bronze T. rex in the world. The cast measures 38 feet in length, stands 15 feet tall, and weighs 10,000 pounds. On October 3, 2001, the skeleton was dedicated to the memory of Dr. Michael P. Malone, 10th President of Montana State University from 1991 to 1999. Big Mike was a gift to Museum of the Rockies from its National Advisory Board and friends.

In 2014, the fossil bones of the Wankel T. rex (MOR 555) were sent to the Smithsonian’s National Museum of Natural History on a fifty-year loan. In its new pose devouring a Triceratops, the Wankel T. rex, renamed the Nation’s T. rex, is now the centerpiece of the David H. Koch Hall of Fossils - Deep Time, a 31,000-square-foot dinosaur and fossil hall inside the Smithsonian.

We encourage you to take and post photos of Big Mike during your visit. #MOR_BigMike. 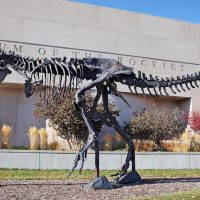