This exhibition examines the lifeways of American Indians living on the Northern Plains and near the Rocky Mountains and illustrates how they have retained their cultural identities despite great challenges.

Indian cultures in the region have endured from paleo to modern American times. Traditionally, these peoples followed the vast herds of bison that once covered the region.  As Euro-Americans moved onto the lands that American Indians had lived on for generations, conflicts became inevitable. Ultimately, the American Indians of the region were forced onto small areas of land that they reserved for themselves in their negotiations with the United States government. Although life has changed for Indians in the region, traditions endure. American Indians have inhabited the Northern Plains and the Rockies for over 12,000 years. Most were mobile hunters and gatherers. Traditional native life remained largely intact until the 1800s.

The first outside explorers into native lands are unknown. However, the Lewis and Clark Expedition (1803-1806) provided the first systematic exploration, mapping, and documented descriptions of the area and its abundant natural resources. The fur trade, the discovery of gold, and the Homestead Act all brought waves of outsiders to the region. Competition for resources and the introduction of horses, metal, guns, cloth, and canvas by outsiders significantly affected Indian cultures.

Culture is the sum total of ways of living built up by a people and transmitted from one generation to another. There is a tremendous amount of similarity as well as diversity in Indian cultures throughout the region. With time, all cultures change. However, today's Indian life still reflects some traditions that are hundreds of years old.

Many Indian people revere their heritage and work hard to maintain their cultural independence. They want to honor their ancestry by keeping their cultures alive. They can no longer fully support themselves with the mobile, hunting lifeway of the past; but they continue to preserve many of their traditions through ceremonies, religious rituals, languages, and stories. 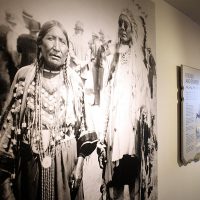 A person's skills at tanning hides and making and decorating clothing showed pride in their child, family, and their skills.

Men's clothing, especially headdresses, expressed a man's accomplishments. Items of decoration like feathers often showed what someone had done in battle or as a hunter or in religious ceremonies.

Pride of accomplishment was an important cultural value, shared between the peoples of the region.

Learn about some of the tools used for gathering, preparing, cooking, and eating food such as a parfleche, bison horn spoon, pemmican pounder, and fire tongs

A three-minute video by Montana PBS and director/producer Charles Dye tells the story of American Indians and their long history in Yellowstone. Just as importantly, Dye’s work examines the ongoing relationships that native peoples maintain with the region through language, ceremonies, and the sharing of traditional knowledge.