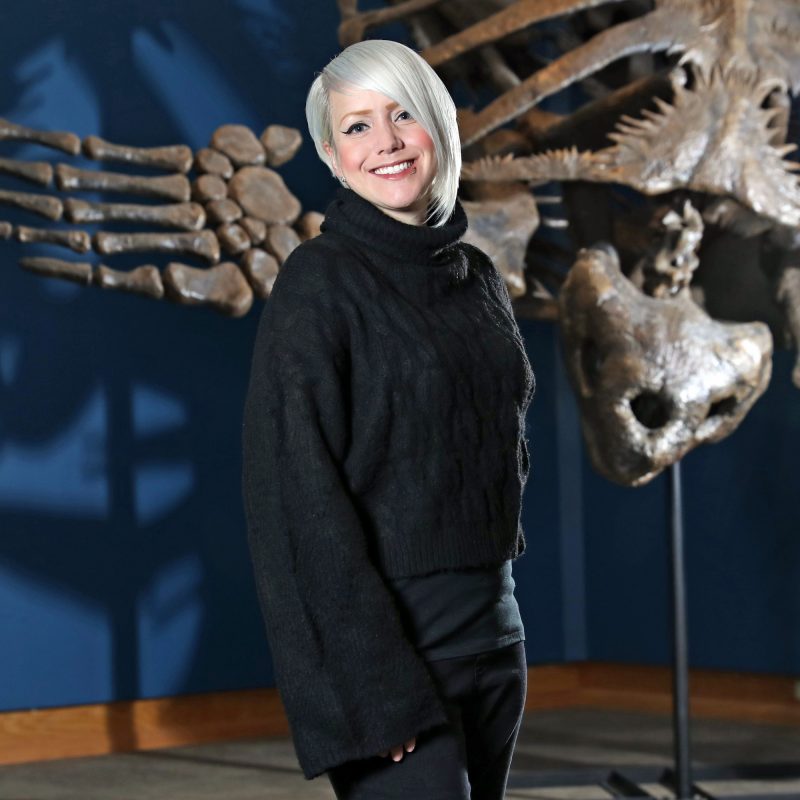 Ashley is a dynamic paleontologist, naturalist, and museum educator. Originally from South Bend, Indiana, she grew up loving dinosaurs from an early age and was inspired by holiday trips to Chicago’s Field Museum to pursue a career in natural history.

Ashley earned her Bachelor of Arts in anthropology (focus: Zooarchaeology) and animal behavior from Indiana University, Bloomington. After graduation, she spent nearly a decade working as a science educator for various educational institutions in southern California, including the Los Angeles Zoo and Botanical Gardens, Natural History Museum of Los Angeles County, and the La Brea Tar Pits. During this time, Ashley also served as the assistant curator of paleontology at the Raymond M. Alf Museum of Paleontology in Claremont, California. While with the “Alf,” she managed the fossil collection and participated in fieldwork including Late Cretaceous dinosaur excavations in the Grand-Staircase Escalante National Monument in Utah and Miocene mammal reconnaissance paleontology in the Mojave Desert’s Rainbow Basin.

Ashley relocated to Ohio where she worked as a naturalist for the Cleveland Metroparks reservation system before taking a position with the Cleveland Museum of Natural as the adult programs coordinator. While at CMNH, she planned and ran events, classes, and workshops to engage adult audiences in science. Passionate for educating the public about natural history, Ashley has designed and implemented thousands of museum tours, programs, and classes for visitors of all ages.

When Ashley is not educating the public in person, she is an active science communicator on social media. Ashley has presented several invited workshops on how to communicate science through social media at professional scientific meetings including the Society of Vertebrate Paleontology and the Association for Materials and Methods in Paleontology annual conferences. Her scientific research has focused on sauropod claw morphology and function, and the evolution of birds from deposits at the La Brea Tar Pits.

In her free time, Ashley loves hiking, rock climbing, visiting museums, and spending time with her husband and two cats.

ABSTRACTS
Fragomeni, A., and Prothero, D. 2011. Stasis in Late Quaternary Birds from the La Brea Tar Pits during the last glacial-interglacial cycle. Journal of Vertebrate Paleontology, Program and Abstracts Book 2011: 112.

BOOKS
Hall, L., and Hall, A. 2021. Gems for Kids: a Junior Scientist’s Guide to Mineral Crystals and Other Natural Treasures. Rockridge Press.

Hall, A. 2020. Fossils for Kids: a Junior Scientist’s Guide to Dinosaur Bones, Ancient Animals, and Prehistoric Life on Earth.Rockridge Press.