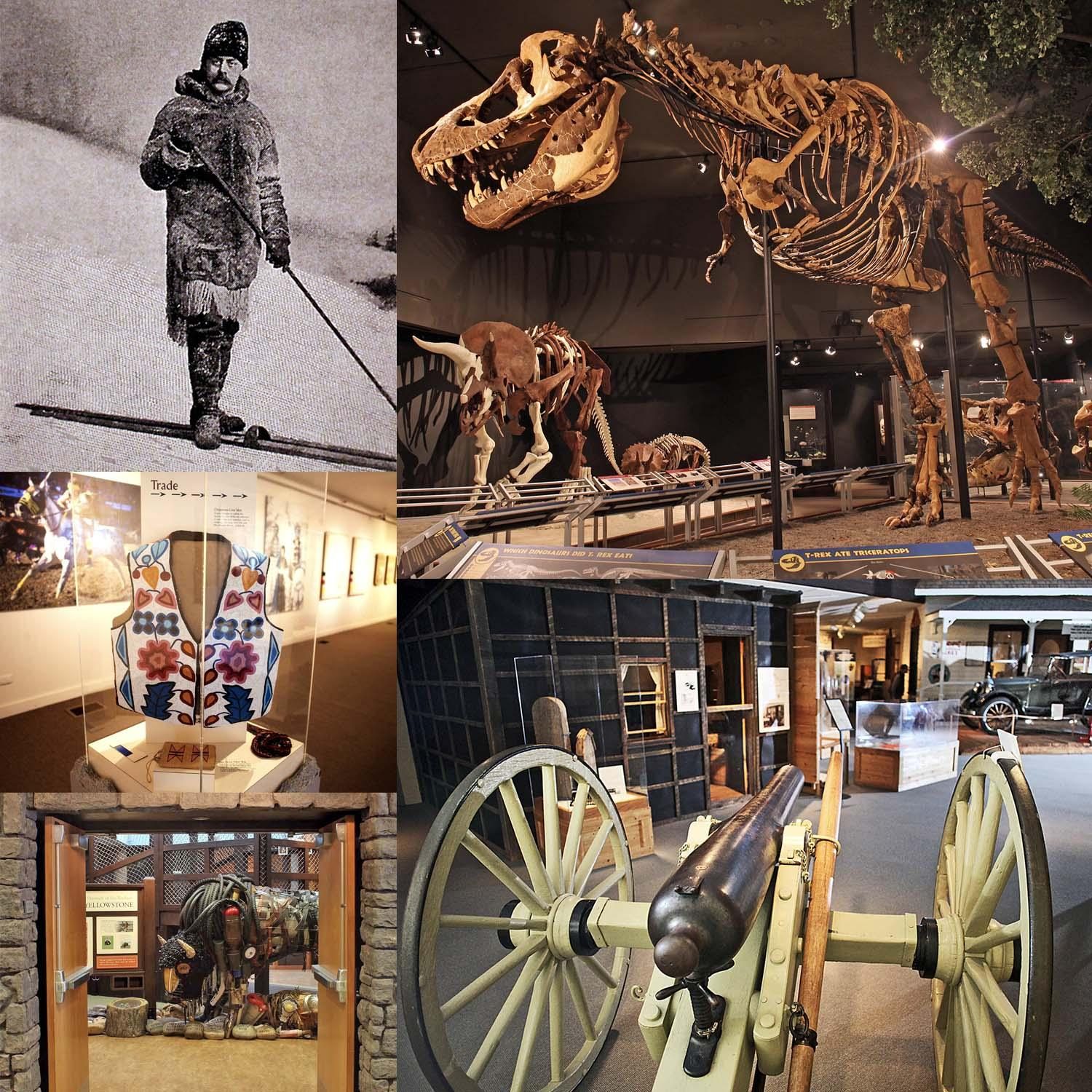 The museum's primary exhibit areas include Landforms/Lifeforms and Dinosaurs Under The Big Sky in the Siebel Dinosaur Complex, Welcome to Yellowstone Country, Enduring Peoples, and the Paugh History Hall. The museum also has over 6,000 square feet of exhibit space for changing exhibits and hosts three to five changing exhibits each year. On the second floor is the Martin Children’s Discovery Center and its exhibit, Explore Yellowstone, specially designed for visitors up to eight years old. The outside exhibits include the horse statue Rusty, bronze T. rex Big Mike, and the Living History Farm, an 1890s Montana homestead with heirloom gardens and agriculture fields.

The changing exhibits program focuses on the museum's mission of bringing the world to Montana. This program seeks a diversity of changing exhibits to complement primary exhibits and encourage repeat visits to the museum throughout the year. The program has grown in scope and scale over the years and now includes internationally renowned, high-profile exhibits on nationwide tours. The museum established the Changing Exhibits Fund to raise money to help offset the costs of these exhibits.

MOR Exhibitions is the traveling exhibitions division for Museum of the Rockies. For more than 30 years, we have been creating, designing, and producing original, high-quality traveling exhibits for museums around the world. MOR Exhibitions has worked extensively in North America and Asia, where millions of museum visitors have seen our popular exhibits. As a museum, we understand the need to produce only the finest temporary exhibits at an affordable price.

Our extensive technical experience in design and craftsmanship makes installation fast and easy, so your exhibition halls are up and running quickly with the minimum amount of effort. Every exhibit produced by MOR Exhibitions is original, researched, and developed by MOR curators and exhibition teams. Our unique catalog of traveling exhibitions cannot be found from any other exhibition company, anywhere in the world. Please look below to learn about our lineup of unique traveling exhibits and contact Pat or Dave to inquire about their availability.

The photographs of Ron Nixon provide critical documentation of the events and landscapes of American railroad history. His knowledge of railroads and skill as a photographer combined to create a significant view of railroads and the scenic beauty of the lands they traversed. Recognized as one of America's best railroad photographers, this exhibition features photographs that chronicle the evolution of steam, electric, and diesel-electric locomotives across the varied landscape of the eastern prairies and the western mountains.

What's great about it?
The exhibition “The Railroads of Ron V. Nixon” presents the steam, electric, and diesel eras of three railroads by one of the best railroad photographers of our time. His dramatic views offer a unique experience with the historic world of railroading.

This is a collection of 75 black and white photographs produced from the Photo Archive at Museum of the Rockies and documents the operation of one of the largest sheep ranches in southwest Montana. From spring lambing, shearing, high-mountain grazing, and cross-country herding, the exhibition chronicles sheep ranching in the Paradise Valley of the Yellowstone River through the beautiful photographs of John C. Haberstroh.

John Haberstroh began making photographs in 1915, using a folding Kodak model 3A, a camera he used exclusively for over thirty years. His growing talent and knowledge of photography led to his becoming manager of the photography department for Sax and Fryers in Livingston, Montana, in the early twenties. Through store displays, John began to market his photographs successfully. It was also during this time that John began photographing the operations of the Harvat sheep ranch in Livingston and the Paradise Valley, a project that he would eventually devote over thirty years to.

What's great about it?
The exhibition combines the aesthetic fine art photography of John Haberstroh and a documentary view of sheep ranching in Montana. The exhibit presents life on a sheep ranch from spring lambing, early summer shearing, summer high mountain grazing, fall shipping, and the daily lives of the sheepherder and his dog.

Little Shadow Catcher: The Life and Work of David F. Barry, is a photographic exhibition about one of the most significant photographic artists of the American West. The exhibition consists of 45 archival photographic prints of Barry’s work taken directly from original plate-glass negatives held in the collections of the Denver Public Library.

David F. Barry worked out of his studio in Bismarck, ND from 1878 to 1890, traveling to military outposts and Indian reservations to photograph soldiers and Lakota people who participated in the Sioux War of 1876. Included here are photographs made by Barry's partner Orlando S. Goff whose images of Lt. Col. George Custer and his officers were highly sought after following the battle on the Little Bighorn River in Montana Territory.

The exhibit explores Barry’s life, work, and legacy during his years in Dakota Territory and features images of the Standing Rock Sioux reservation where Sitting Bull, Gall, Rain-in-the-Face, and their people were settled in the 1880s.

Museum of the Rockies Curator of History, Michael Fox examines Barry as an artist, salesman, entrepreneur, adventurer, small-town studio photographer, and ultimately, a participant in and purveyor of the myth of the American West.

What's great about it? 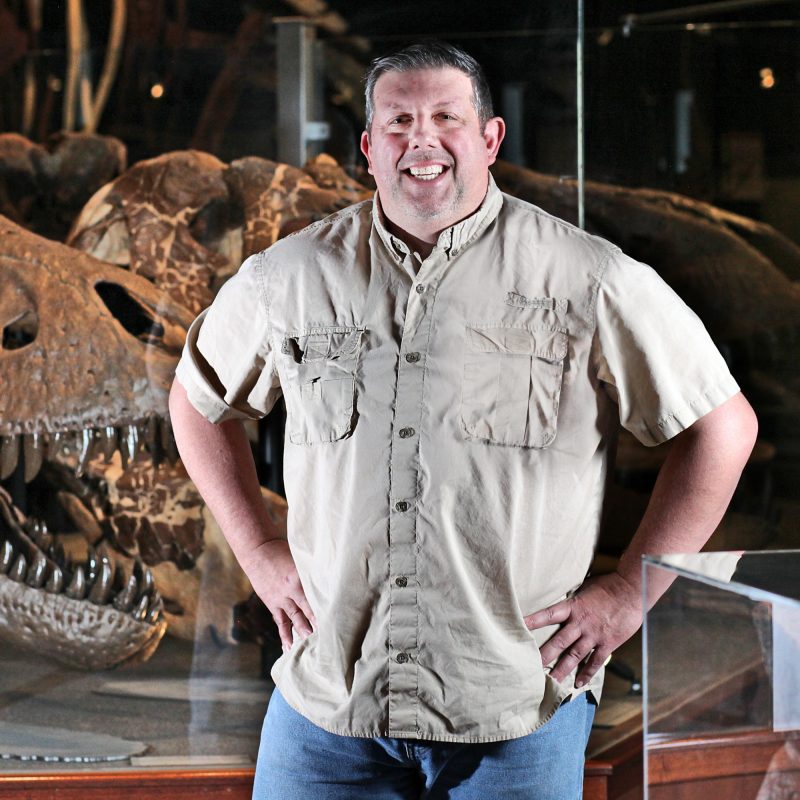 Scott A. Williams
Director of Exhibits 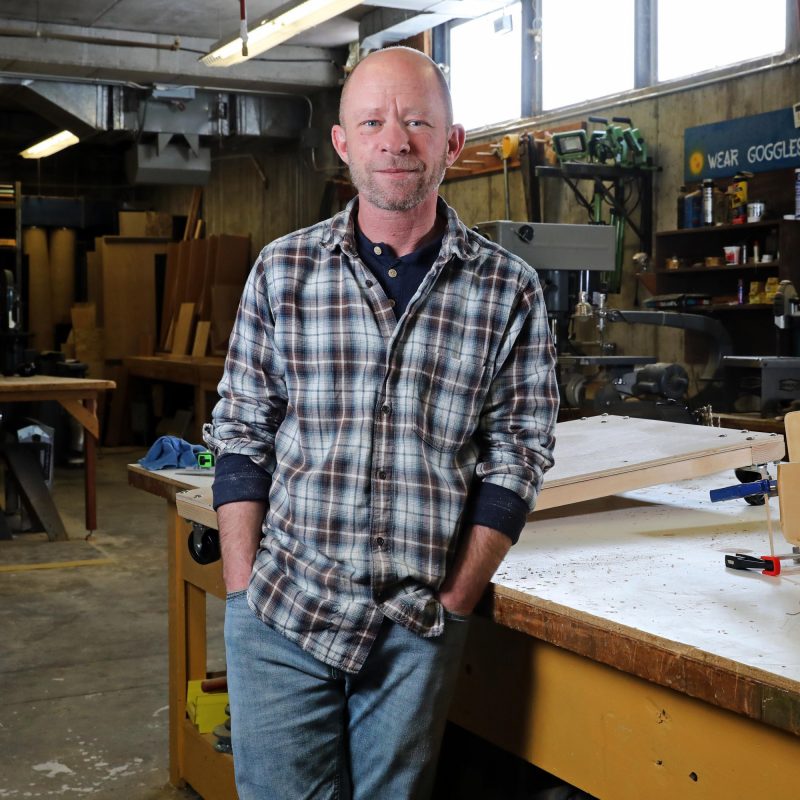